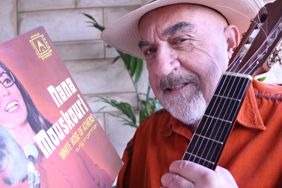 Loucas Loizou performs the life and songs of Nana Mouskouri – the girl from the Greek island of Crete, who has sold more than 300 million records. She sang in at least twelve languages. The show is acoustic with explanations of the lyrics of the songs.
Loucas Loizou has performed over 2000 shows in London and he has too many ★★★★★ to mention after Cat Stevens gave him his first job singing in his family's restaurant.