West Side Story explores young love and tensions between rival gangs the Jets and the Sharks on the streets of 1957 New York.
This film directed and co-produced by Steven Spielberg, with a screenplay by Tony Kushnere film is the second feature-length adaptation of the 1957 Broadway musical by Leonard Bernstein and Stephen Sondheim which is loosely based on William Shakespeare’s Romeo and Juliet. It stars Ansel Elgort and Rachel Zegler with Ariana DeBose, David Alvarez and Rita Moreno who appeared in the 1961 film and has a supporting role and is an executive producer. Choreography is by Justin Peck.
Tickets $32 Adults; $30 Seniors includes Ticket, Fruchocs, Choctop, Wine or Bubbles and Sydney fireworks. Have a meal beforehand across the road at the Torrens Arms Hotel, 95 Belair Rd, Kingswood at 7 pm. 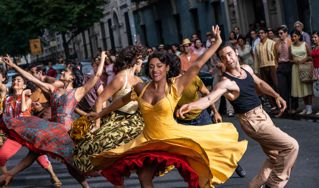